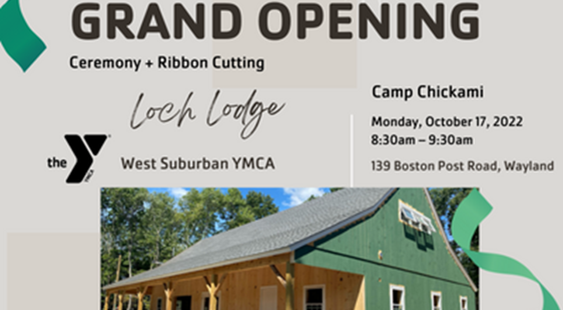 The West Suburban YMCA celebrated the completion of Loch Lodge at Camp Chickami in Wayland.  The new multipurpose building is named in honor of Chickami legend Jim “Loch” Lochiatto, a longtime Watertown educator who was involved with the camp for more than 40 summers.  Y leaders thanked donors to its capital campaign during a ribbon-cutting ceremony with special guests including state Rep. Carmine Gentile.  Since it opened in 1955, Camp Chickami has doubled its capacity to nearly 300 children but the physical space had not kept up with the growth – until the development of Loch Lodge.  The new building, built with plans and building kit from Country Carpenters, and constructed by Commodore Builders of Waltham, will house administrative offices, a nurse’s station, restrooms and a multi-purpose space that is much-needed on rainy days.