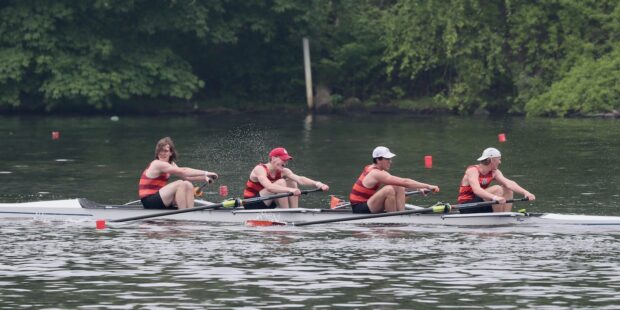 Wayland-Weston Crew took to the Merrimack River in Lowell on May 21-22 for the US Rowing Northeast Youth Championships, a two-day regatta that brings together the region’s toughest competition, where elite rowing clubs and school programs like Wayland-Weston’s compete for spots in the upcoming US Rowing National Championships, June 9-12 in Sarasota, Florida. Wayland-Weston has sent at least one boat to compete in the nationals every year since 2005 (with the exception of seasons impacted by Covid), and this year, the team did not disappoint. The cool air and cloud cover on Saturday morning made for an ideal start, even as temperatures rose throughout the day, and Sunday’s record heat didn’t stop Wayland-Weston from success in the Grand Finals, as the team will be sending three boats to compete on the national stage in the prestigious rowing event that features over 150 teams from across the country.

To qualify for the US Rowing Youth National Championships, boats needed to progress through time trials, semifinals, and then place top 4 in the Grand Final to qualify. The Varsity Boys had a strong showing, as both the straight 4 (Zachary Kano, Andrew Orio, TJ Dahl, Conall Lane) and the u17 single (Zachary Kano) placed 4th in the Grand Finals, qualifying for nationals. Several other boats made it to their semifinals, and all rowed hard.

The Varsity Girls competed hard throughout the weekend as well, racing an eight, a coxed four, a straight four, a double, and a single. The eight and the fours were both able to progress to the semifinals, and the straight 4 (Riley Reynolds, Ava Balukonis, Maddie Genis, Sophia Xie), placed fourth in their Grand Final, earning them a trip to compete in nationals.

The Novice Girls raced aggressively in their two events, the Novice 8+ and the Novice 2x. Novice Girls coach Sarah Maietta said, “The double showed grit and determination when confronting the challenges of racing as a blind boat (no coxswain) on a bouyed 2,000 meter course for the very first time. They displayed excellent responsibility and independence to conduct their warm-up and race on their own, a challenge even for seasoned rowers.” Of the Novice 8+, who raced in the Grand Final against Greenwich, CRI, Connecticut Boat Club, and Saugatuck, Maietta said, “They faced some of the toughest competition in the country from elite junior rowing clubs, and showed they belong right at the top, racing 2,000 meters of their very best technique and determination to hold on to the pack, with an exciting sprint that earned them 5th place.”

The Novice Boys 8+ (coxswain Enious Taggart Evan Brown, Alex Dremov, Thomas Lee, Felix Kissell, Shrihan Yadav, Robbie Walmsley, Spencer Winchman, and Josh Hanson) competed in their first full 2,000 meter race of the season. Novice Boys coach Yara Akkeh praised the rowers, saying they “showed grit and strength in their race this weekend against some of the region’s top Novice 8s, rowing with unity and determination and showing their work from the past weeks, with a strong third place finish in their heat.” Though they did not advance to finals, they closed the speed gap between themselves and numerous other competitive crews and demonstrated that they will be strong competition at States.

Wayland-Weston Crew is now in the final stretch of a strong season, looking to take home multiple medals and the overall championship at the Massachusetts Public School Rowing Association State Championships in Lowell on May 29, even as its three qualifying boats prepare to take on the country’s top competition in the Youth National Championships. The team hopes to add another season to the state championship banners in both high school fieldhouses, and welcomes your support this weekend—come by the orange and maroon tent at Heritage State Park in Lowell and cheer them on!