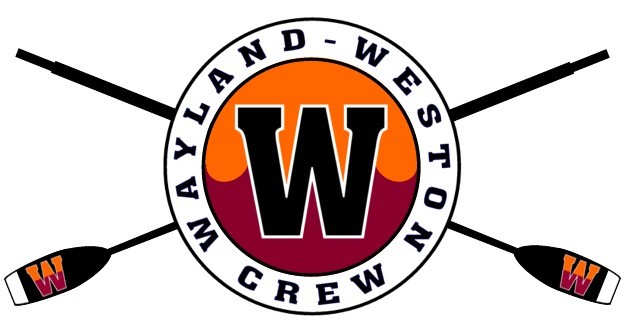 Kicking off the spring season with their first race of 2022, Wayland-Weston Crew made a strong showing at the sixth annual Harvard Henley Regatta. Hosted by Bare Hill Rowing Association, the competition—a round robin of dual racing between Wayland-Weston, Boston Latin (BLS), Bromfield Acton-Boxborough (BAB), and Brookline High School (BHS)—is a unique event that pays homage to England’s famous Henley Royal Regatta, founded in 1839. Bare Hill’s version this side of the pond was held on April 24 in Harvard, MA, where crews competed in chilly, overcast conditions and spectators lined the beach and docks to cheer on their teams.

Unlike the famed race’s course on the Thames, the course on Harvard’s Bare Hill Pond is much shorter, at 1,000 meters. For each event, teams competed in a two-boat knockout format, racing head-to-head in qualifying heats of two, with the winners going on to compete in the A final and the losers two competing in a B final. The first event of the day was one of Wayland-Weston’s best overall. The 1st Varsity Girls 8+ had a rough start during their first race, but were able to push past BAB during their final sprint. In the final, they beat BLS with open water during their second race, winning the Artemis Trophy for the 3rd year in a row. The 1st Varsity Girls 8+ rowers were Maddie Genis, Skylar Gould, Siena Flanigon, Riley Kendall, Ava Balukonis, Quinn Gleason, Sophia Xie, and Riley Reynolds, with coxswain Max Markarian.

Wayland-Weston’s Varsity Boys had an excellent opportunity to test its speed against some of the best competition in the region. Though stumbling in all of their first races, each boat managed to rebound and reset into great second races in the petit finals. Despite losing their qualifying heat, the 1st Varsity Boys 8+ was even able to post the fastest time among both the A and B finals with a time of 3.22.1. Rowing in the were Lucian Mahoney, Connal Lane, Aleksi Reczek, Paul Speciel, Andrew Orio, Sean Balbale, Lucas Tang, and Zach Bell, with coxswain Sophie Roman.

Strong rowing prevailed for Wayland-Weston’s other boats as many also placed first in their B finals, including the 2nd Varsity Girls 8+ and the 2nd Varsity Boys 8+. Another event of note was the 3rd Varsity Boys 8+, which won its B final with novice rower Briar Sutherland-Dufour stepping up and sitting in for that boat’s vacationing coxswain. The Novice Girls 8+ won their qualifying heat and placed second in the A final, and the Novice Boys 8+ quickly learned from their first race to improve in their second race, with strong execution and a hard-fought race against BAB.

The afternoon’s events featured varsity coxed fours and doubles. The Varsity Girls again took first place with their 1st Varsity 4+, composed of Sophia Xie, Riley Reynolds, Ava Balukonis, Maddie Genis, and coxswain Max Markarian. The 2nd Varsity Girls 4+ were able to get second place in their A final, despite their cox box breaking 20 strokes into the race.

An unusual moment occurred on, of all places, land, when the 1st Boys Varsity 8+s from BAB and BHS, whose final ended in a dead heat, competed to break their tie in a tug-of-war with rowers and coxswains vying for two out of three. Bromfield Acton-Boxborough took the first two to claim the win.

All told, the Harvard Henley was a promising start to the spring season for Wayland-Weston—an opportunity to focus on getting back into the race mindset and to gear up for Saratoga Invitational Regatta on Fish Creek in Saratoga Springs, NY, where WW’s varsity rowers will compete on April 30 & May 1.

Full regatta results and more info about Wayland-Weston Crew can be found at https://www.wwcrew.org/home