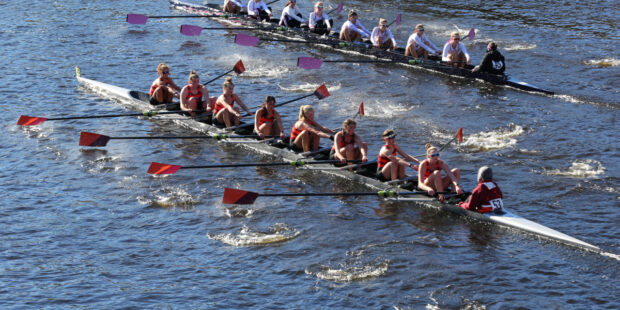 A perfect fall day marked the return of the Head of the Charles Regatta to excited athletes and supporters from all over the country and internationally, including Wayland-Weston Crew. Two Wayland-Weston HS boats–a Varsity Girls 8+ (eight rowers plus coxswain) and a Varsity Boys 4+ (four rowers plus coxswain)–raced on Sunday in this world-famous event, the largest regatta in the world, with over 600 clubs, 2,200 boats, and 11,000 rowers from 20 countries cheered on by 250,000 fans. WW coaches and alumni also competed, representing their colleges and clubs.

Though HOCR is in our own backyard, it is essentially the national championship for fall head racing, and an honor to compete in, as the best rowing programs from across the US and beyond send their most competitive squads to the storied competition on the famous Charles River upstream course over three tortuous and grueling miles while negotiating seven bridges.

The Varsity Girls (Max Markarian as coxswain, Quinn Gleason, Siena Flanigon, Natalia Serov, Ava Balukonis, Sophia Xie, Megan O’Donnell, Riley Kendall, Maddie Genis) had another remarkable performance, finishing 26th among 76 boats in the Women’s Youth Eights event, requalifying the boat for next year’s HOCR. Such a finish is both an indication of how highly regarded this crew are among a highly competitive national field, and a promising sign of its strength, given the Covid hiatus and its young team.

From the WW coaching staff, accolades go to WW alumna Sarah Maietta (representing Riverside Boat Club), who finished fifth in the field of the Women’s Lightweight Singles, a serious and elite race with determined competition. Representing Cambridge Boat Club, coach Paul Hoffman, with WWRA board member Tim Wood in the boat, did a fun race on Saturday in the Grand Master Eights Age 60+, racing again on Sunday in a Director’s Challenge Mixed Eight (men and women) that included WW the Varsity Girls’ Lily Noyes. Completing the coaching representation was Dan Mahoney racing with UMass Aging Aggies Rowing Program in the Men’s Alumni Eights, and Yara Akkeh as coxswain in the Women’s Master Fours Age 60+ for Newport Aquatic Center.

The 2021 Head of the Charles also marked an opportunity for the Wayland-Weston Crew community to see familiar faces both on and off the water and cheer with pride for WW alumni as they raced for their colleges. Alumni in competition this year included Clara Hurney (racing for Colby College in the Women’s Collegiate Fours), Kate Maietta (racing for U. Penn. in the Women’s Championship Fours), Jenna Martin (racing for Dartmouth College), Max Marchiony (racing for Dartmouth College in the Men’s Lightweight Eights), Danielle Kahan (coxing a Friends of Brown Women’s Crew in Women’s Alumnae Eights) and Henry Gula stroking the Massachusetts State Police entry in Men’s Masters Fours Age 40+. Jamie Martin, racing for MIT in Women’s Lightweight Fours, took first place.

On Halloween, WW heads to Fall River’s South Watuppa Pond for the MPSRA (Massachusetts Public Schools Rowing Association) Fall State Championships, a U.S. Rowing Association sanctioned-regatta. In their last regatta of a powerful season, the Varsity Girls 8 will race to hold on to their 2019 trophy as the team aims to bring home a few new wins for 2021.