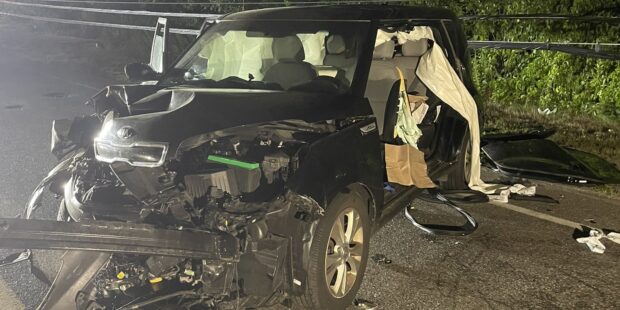 NBC Boston 8/3/2022: Woman Critically Injured in Overnight Crash in Wayland. An overnight crash in Wayland, Massachusetts, left a woman with “critical injuries,” according to first responders. Wayland Fire Department crews were on scene at Route 30 and Willow Brook Drive around 11 p.m. Tuesday, a tweet from the department said. The woman hurt had to be extricated from the car, which sustained major damage during the crash.

Wayland Patch 8/3/2022: Woman Airlifted After Wayland Crash Along Route 30. A woman was critically injured late Tuesday night after a crash along Route 30 in Wayland. The Wayland Fire Department reported the crash around 11 p.m. across from the Loker Recreation Area along Commonwealth Road. The woman crashed into a utility pole, and had to be extricated from the car, the department said.

Boston 25 News 8/3/2022: Woman extricated from wrecked vehicle, flown to hospital with critical injuries after Wayland crash. A woman was extricated from her vehicle and flown to the hospital following a crash in Wayland late Tuesday night. Emergency crews responding to a report of a crash on Route 30 near Willow Brook Drive found a wrecked vehicle that had toppled a utility a pole, according to the Wayland Fire Department.