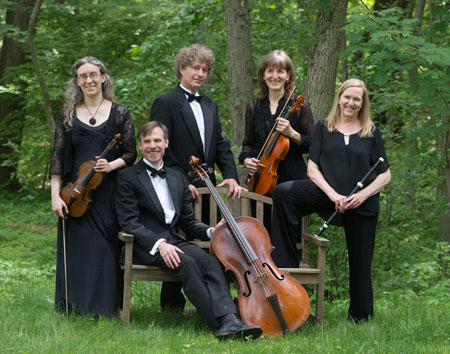 The acclaimed period instrument ensemble Musicians of the Old Post Road opens its 30th Anniversary Season with a celebratory free concert on September 23 at 3pm at Gore Place in Waltham. Titled Pleasure Gardens of London, this outdoor (tented) event will be in the festive spirit of the famous outdoor concerts held at Vauxhall on the outskirts of London in the 18th century. Acclaimed soprano Teresa Wakim is the vocal soloist, and WCRB radio host Laura Carlo will emcee the event.

This special concert is offered free of admission charge as the ensemble’s way of thanking the community for supporting the group’s music-making through the last three decades. Tickets can be reserved at http://oldpostroad.org/concert_series.

The program will include symphonies, songs, and concertos by Handel, Arne, Lampe, Hook, and others, performed on period strings, keyboard, and wind instruments. Soprano Teresa Wakim returns as soloist for the special program. She was First Prize Winner of the International Soloist Competition for Early Music in Brunnenthal, Austria, and as a specialist in historical performance, she is a much sought-after soloist in Europe and North America.

This event is presented in cooperation with Gore Place, a historic mansion built in 1806 as a summer home for Massachusetts lawyer and politician Christopher Gore. The property at 52 Gore Street in Waltham was designated a National Historic Landmark in 1970. Guided tours of the Gore Place mansion will be offered prior to the concert. Period-style refreshments will be served at concert’s end.

This program opens Musicians of the Old Post Road’s 30th annual subscription series, which includes five programs exploring the impact of the Enlightenment on 18th-century music and culture. From the rise of the public concert to the industrious creativity of Classical freelance musicians, these programs offer glimpses of the multi-faceted influences of societal changes, philosophy, and scientific discovery on music-making in the Baroque and Classical eras.

The event is made possible by a generous gift from an anonymous donor and the David Greenewalt Charitable Trust. Learn more about this concert and the rest of the ensemble’s festive season on the group’s website, www.oldpostroad.org. The concert series is sponsored in part by the Massachusetts Cultural Council, an agency of the Commonwealth of Massachusetts.

Musicians of the Old Post Road takes its name from its acclaimed concert series that brings period instrument performances of music of the 17th, 18th, and 19thcenturies to beautiful historic buildings along New England’s fabled Old Post Road, the first thoroughfare to connect Boston and New York City in the late 17thcentury.

Winner of the 1998 Noah Greenberg Award from the American Musicological Society, Musicians of the Old Post Road has also received programming awards from Chamber Music America and the US-Mexico Fund for Culture. The ensemble has toured in Germany, Austria, and Mexico, and has appeared at festivals and on concert series in the US, including the Indianapolis Early Music Festival, the Boston Early Music Festival Concert Series, the Castle Hill Festival, the Artists Series at Mercer University in Macon, Georgia, and the Connecticut Early Music Festival. The ensemble held a residency at Dartmouth College and was featured on WCVB television’s “Chronicle” program and 99.5 All Classical radio’s “Live from Fraser” program.

The ensemble’s discography includes seven recordings that have each been praised in the US and abroad. They include: The Virtuoso Double Bass (Titanic, 1994), Trios and Scottish Song Settings of J. N. Hummel (Meridian, 1999), Galant with an Attitude: Music of Juan and José Pla (Meridian, 2000), Quartets of Telemann and Bodinus (Meridian, 2004), Feliz Navidad: Christmas from Spain and New Spain (Meridian, 2008), Roman Handel (Centaur, 2013), and Earthly Baroque (Centaur, 2017).